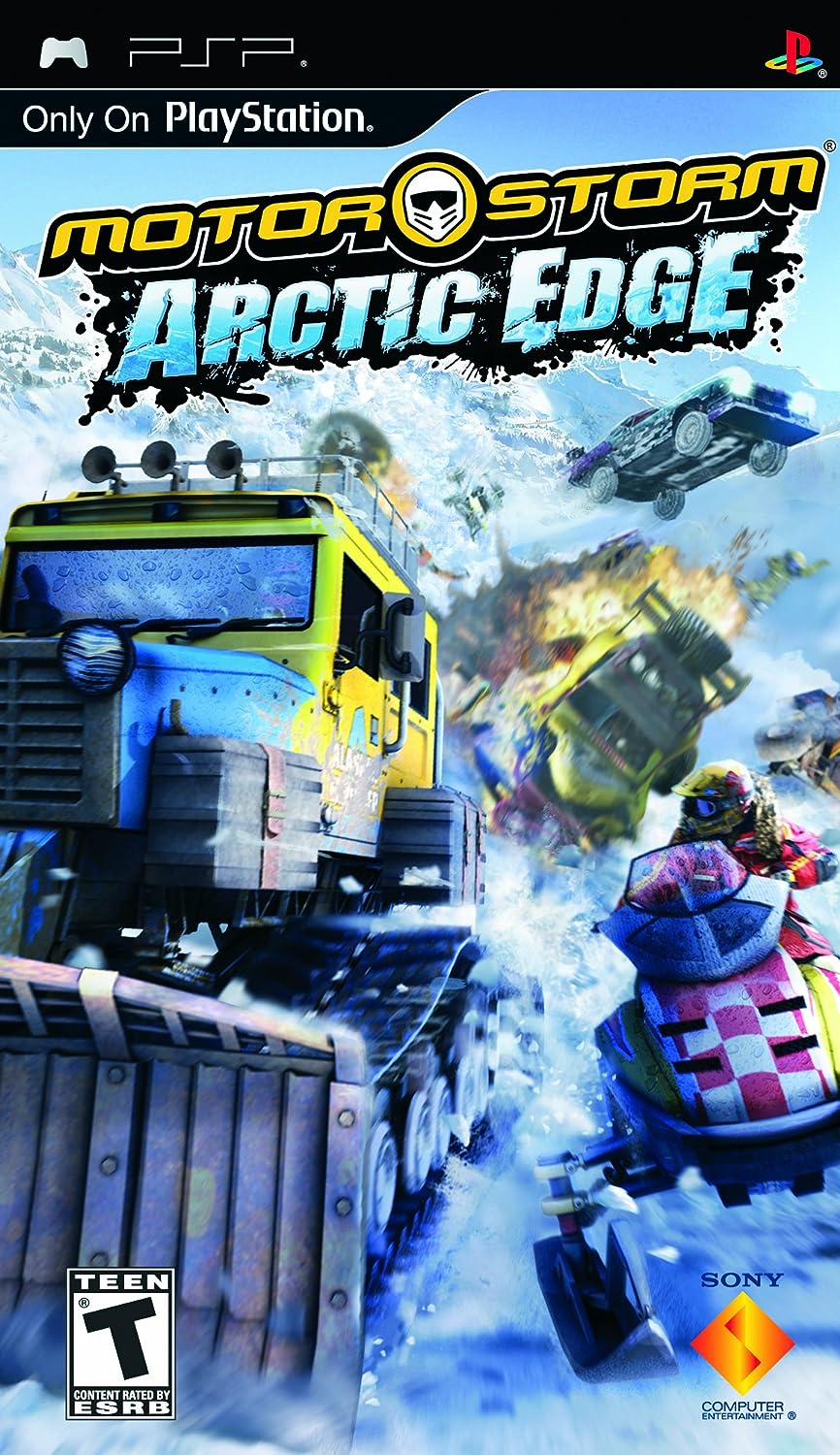 MotorStorm has ripped-up the Monument Valley desert, it’s obliterated everything that stood in its path on Pacific Rift, and now it’s set for a whole new challenge. Battling the frozen wasteland of Alaska’s Arctic Edge.

"span"
High elevation 8-vehicle races.
"span"View larger"span". "span"
8-person online multiplayer.
"span"View larger"span". "span"
Winter specific vehicle classes.
"span"View larger"span". "span"
Win at all cost MotorStorm action.
"span"View larger"span". "span"
Dangerous, yet strategic winter terrain.
"span"View larger"span". Racing the High Country"span"
Like all the games in the MotorStorm"span" series, MotorStorm: Arctic Edge"span" aims to deliver brutal, arcade style off-road racing, in this occasion in the breathtaking yet lethal and unpredictable setting of Alaska. Although the game features racing over all sorts of terrain, the majority of the action is set up and down high mountain slopes where plummeting temperatures ensure that there will be plenty, although varied levels of snow and ice. These conditions become more and more prominent as the game progresses and subsequent tracks take racers higher into the mountains. Yet as difficult and challenging as racing in these winter conditions is, the snow and ice is also designed to also be used to racer's advantage if they so choose. For example, the slopes above the game's 12 reversible tracks contain the capacity for sudden avalanches. These can be accidentally set off by the loud crash or explosions of vehicles, but can also be intentionally initiated by a well-timed horn. This means that a close competitor(s) that can't be shaken through driving skills alone can feasibly be buried in the snow with the blow of the horn. The caveat is that avalanches can also engulf the horn blower as well, so timing is everything. Ice bridges are another winter related feature that can be used to the racers' advantage. As the tracks wind up the mountain at higher elevations these arches will become more prominent, but they are not necessarily as stable as they might appear. This means that larger vehicles can feasibly destroy them before competitors can cross them and their remnants can even come crashing down on racers from above. Racers coming off turbo bursts will also quickly learn that the snowbanks found throughout the game can be used, just like the waterfalls in earlier MotorStorm games, to cool off engines headed towards a boil over. Together these inhospitable environments make for some of the most fun and challenging races Stormers have ever faced.

The Vehicles
Action in MotorStorm: Arctic Edge takes place across three different racing altitudes. This means a variety of terrain and thus a variety of vehicle classes. Players of previous games in the series will recognize the inclusion of most of the classes from those games, including Bikes, ATVs, Buggies, Rally Cars, and Pluggers, but with grip at a premium, two new vehicles have been introduced to combat the ice, the cold and the snow - the Snowcat and the Snow Machine. With ice, heavy snow and destructible bridges a real factor in the game one has the power and size to blast through packed snow, while the other has the grip and pace to combat most of what the subzero conditions can throw at it. Regardless of the vehicle chosen, players can personalize their rides in the livery by updating with a selection of various parts including wheels, exhaust, spoilers, and sponsorship stickers.

Multiplayer and Photo Modes
Racing requires competition. With that in mind MotorStorm: Arctic Edge provides plenty of racing options. All race types, including the single player option, accommodate up to eight vehicles. This keeps the racing frantic, without slowing down the game's frame rate. Players can also take the action online competing against each other wirelessly via the Ad Hoc Mode on the PSP, or by using Infrastructure Mode to make it to the summit of the online global leaderboards. Racers can also immortalize the moments of their greatest triumphs and defeats by activating Photo Mode which allows you to snap and save the best action photos and send to friends online.

Create Your own Soundtracks"span"
Have a set of tunes that you want to race to? MotorStorm: Arctic Edge"span" lets players take advantage of the PSP's expandable memory to add music from a memory stick and create a full list of customized tunes to inspire each race as they choose.

Film Ireland is delighted to announce that one of our talented writers, Kimberly Reyes is among the new set of members due to join the Golden Globes organization, marking the largest, and most diverse class in their organisation’s history.

We are thrilled to be partnering with Still Voices Short Film Festival to bring you a series of podcasts. This year acclaimed director Terence Davies will attend the 2021 festival for a special screening of his 1988 masterpiece Distant Voices, Still Lives (after which the festival took its name). Ahead of his appearance Terence was kind enough to give us his time and join Paul Farren to talk about films, filmmaking and all that comes between!

Michael Lee’s thoughts on Wes Anderson’s latest film are hot off the presses.

Stephen Burke braves the storm on a remote island.

In this episode of The DocArena Podcast, Ross Whitaker talks to Ric Burns about his documentary ‘Oliver Sacks: His Own Life’.

We are thrilled to be partnering with Still Voices Short Film Festival to bring you a series of podcasts. We’re kicking off with 3 very talented documentary filmmakers. Kaitlyn Schwalje & Alex Wolf Lewis, and Tom Dream join Jenny Keogh to talk about their films

Shaken but not stirred, Gemma Creagh takes a look at Daniel Craig’s last outing as Bond in No Time to Die.